UP FROM THE ASHES... 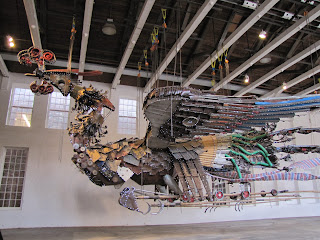 My pals, Yoshi and José, and I were lucky enough to visit Xu Bing’s “Phoenix Project” last week during its final days at MassMoCA in .  I had seen pictures of the installation on the museum’s website; but the small images cannot really prepare you for stepping into a space the size of a football field to experience these immensely powerful, yet strangely elegant, beings.


Xu Bing, one of the most influential and prolific Chinese artists working today, was originally commissioned in 2007 to create a piece for the , a luxury highrise construction in .  In contemplating the project, Xu Bing was struck by the squalid living conditions of the migrant workers whose incredible skills were being used to erect the sumptuous buildings changing the face of .  His decision to utilize scrap from constructions sites – demolition debris, steel beams, tools, conduit, empty fire extinguishers, even the workers’ hard hats – to create a pair of 10-ton mythical birds was later met with disapproval from the original funding source.

The artist persisted, however.  He found a new benefactor, continued to gather materials, put together a team of assistants, and over the next two years labored to bring his vision to life.  The male, “Feng”, is 90 feet from head to tail; and the female, “Huang”, is 100 feet long.  Their combined weight is over 20 tons.  Suspended from the rafters of MassMoCA’s huge gallery space, the pair evokes wonder and a sense of the extraordinary.  Like all good art (and like the practice of Feng Shui) these pieces have the power to surprise the viewer, to refresh – to reawaken a childlike curiosity.