THE FOREST FOR THE TREES... 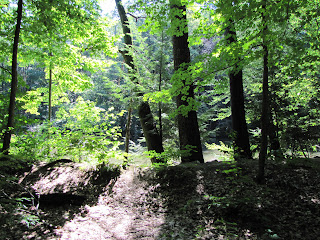 I had lunch with my friend, JoDee, the other day, and over our scrumptious shared poached pear dessert, she asked me if I was still writing my Blog. I was taken aback for a moment, and she pointed out that I hadn’t made an entry since May. Caught.

I offered some lame excuses, such as, “Does anyone really read these things, anyway?” She was quick to set me straight: yes, they do. She, in fact, checks in on a number of Blogs on a regular basis; and, just as with the magazines she also reads, there is no evidence of the reading having been done.

Taking another bite of the now pleasantly melting ice cream, I was able to admit that I had come up against some walls during the past few months. During June, I found that I had nothing to say; during July, I was lazy (an object now not in motion); and during, August, I found that I did have something to say, but I was afraid to say it. Aha.

JoDee, a writer, told me that lately she has really been inspired by Betsy Lerner’s The Forest for the Trees. Lerner is a long-time editor who offers up savory stories and pungent advice for many categories of writers on the creative path. And, although I don’t see myself as a “real” writer, I can’t help but identify with some of the same issues. In being reluctant to describe a situation which could be construed as critical or uncomfortable, something gets repressed – and just as with any physical clutter, a stagnant energy starts to collect and build.

Feng Shui encourages us to recognize the places within our homes to which we don’t want to go. When we can bring some light to these less than favorite areas, we are beginning to find a new balance within our space. In having the courage to be creative, to find that inner voice that connects to the heart of the matter, something within is also allowed to breathe, unfold, relax, and get released. And in that process, there is likely to be a shift in understanding -- from the trees to the forest. Okay, onward -- thanks, JoDee.

Posted by Feng Shui Western Mass at 12:03 PM No comments: