A TIME FOR SETTING SAIL... 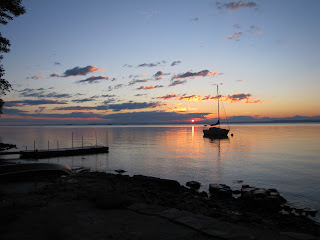 Cultural anthropologist Mary Catherine Bateson visited the Odyssey Bookshop last week to speak and read from her latest book, Composing a Further Life: The Age of Active Wisdom. Ms. Bateson, the daughter of Margaret Mead and Gregory Bateson, is now 71 herself, and has spent the last few years focusing on the stage of life that Baby Boomers are now entering – a stage she calls “Adulthood II.” She says that because people are living longer, enjoying better health, and staying active, the old stereotypes of aging are no longer accurate (and certainly not helpful). She contends that “Adulthood II” is actually a new stage, one in which those of us who have made it this far get to use our accumulated experience to redefine ourselves -- and reshape our lives.

This year, the Chinese Solar New Year, which began on February 4, carries the energy of 7 , according to an ancient form of astrology based on the I Ching, or Book of Changes. A 7 year is a time for enjoyment, celebration, reaping the rewards of our efforts, and recognizing our achievements. It represents the harvest and the fullness of life. More than ever, we are encouraged to experience and fully appreciate the world through our senses -- tasting, touching, smelling, seeing, and hearing the deliciousness of our lives. A 7 year is also all about creativity – finding the joy of our own expression.

During her talk, Mary Catherine Bateson stopped to adjust her gray turtleneck and pull out a silver necklace that had slipped beneath it. She explained that the lovely, sparkling, and very intricate chain had been made by one of the dozen people she had interviewed for her book, a man who had been a boatyard worker during his working life. After retirement, he and his wife sold their house and possessions, bought an RV, and headed for . He took a class in silvermaking at the senior RV park where they stopped. He now has a new and even more fulfilling career as a maker of fine jewelry and art objects.

For those of us approaching Adulthood II (and also anyone who can visualize that stage ahead), this is a great year to drop some ballast, feel the wind in our sails, and embark on a new adventure…


Posted by Feng Shui Western Mass at 10:40 AM No comments: