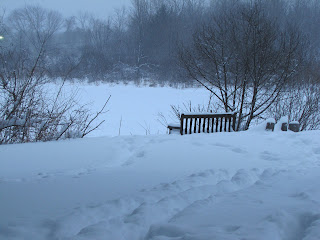 With the weather people forecasting another “monster storm” heading our way, the panic is on. I went to three stores this morning looking for a telescoping roof shovel, something I wouldn’t give a thought to most of the year; but today, they’re all sold out. I was welcome to call back as early as day after tomorrow to find out if the shipment has arrived.

At this stage of the game, it is truly challenging to believe that spring is around the corner. But it is just now, in the deepest chill of winter that the promise of warmer times begins to assert itself again. The ancient sages perceived that our universe naturally expresses itself in two fundamentally different ways. These two expressions – Yin and Yang – do not exist separately from each other; but, instead, are interdependent and in constant flux. At the moment that either expression reaches its greatest capacity, then it begins to change, perhaps subtly, even invisibly, at first. John Fitzgerald Kennedy stated this principle in another way over half a century ago:

“Every area of trouble gives out a ray of hope…

Yin and Yang are really two sides of the same coin – one does not exist without the other. Hot and cold, dark and light, wet and dry…each shift and dance with the other. In Feng Shui we are working with these seeming opposites, always striving for that place of balance, of hope -- the promise of spring.

Posted by Feng Shui Western Mass at 2:18 PM No comments: