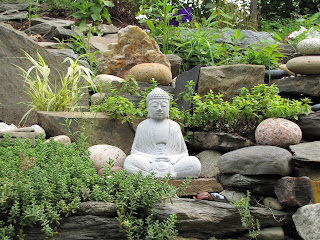 Almost 12 years ago, during the weekend following September 11, I began my study of Feng Shui in earnest. I was part of the second class of The New England School of Feng Shui, and most of us were a bit dazed as we stood in the hallway outside a Worcester hotel meeting room waiting to get checked in. Many of us had wondered if the class would start as scheduled after the events of the week; but, as we moved forward in line sniffing the pleasantly uplifting aroma of nag champa incense, we began to feel that this was movement in the right direction.

Our guest teacher that weekend was William Spear, the author Feng Shui Made Easy: Designing Your Life with the Ancient Art of Placement. Mr. Spear told us that he had been in New York City during the towers collapse, although he had been unaware of what was happening. He had been working with a client in a soundproof room all morning, and only after he completed the session did he realize that the city was in chaos. With the events of the week as a compelling backdrop, Mr. Spear encouraged us to cultivate the “beginner’s mind”, that is, a mind that is present within each moment – and not defined by thoughts of past or future.

One of the greatest skills a Feng Shui practitioner can develop is to acknowledge the reality that exists -- to not turn away from a difficult, problematic, complex world; and at the same time, to be able to visualize what can be. To do this, we have to constantly bring ourselves back to a receptive state, something characterized by the image of an empty vessel. Mr. Spear underscored the fact that as human beings, we are “meaning making machines”. We are always trying to explain things both to ourselves and each other -- when most people are really in a state of “don’t know”. Although it goes against the grain of our western culture, Mr. Spear suggested that if we could pull back and accept this sense of not knowing, it would galvanize us.

The first chapter of Feng Shui Made Easy is entitled, “A New Way of Being”. It starts with a proverb that continues to inspire me a dozen years after hearing it for the first time, “Empty vessels make the most noise”. When we are empty we’re full of possibility – it is the state of being empty that makes the vessel useful. Thank you, William Spear.