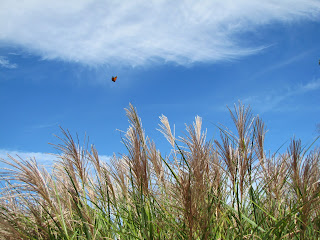 The practice of Feng Shui involves identifying the places in your home which unsettle, worry, bother, and disturb – the places you avoid. These are precisely the places that are calling for attention, for light, for activation and healing. These spots may sit for months, years, and even decades ignored and gathering dust; however, they are instilling the environment with an ever-growing force of stagnation and decline.

I spent my early years in the ethnically diverse section of Springfield called Indian Orchard. My Polish grandparents came to America in the early 1900's, started a family, and worked hard to put down roots that would provide a launching point for a better life. They planted apple trees, pear trees, and a cherry tree in the small but sunny backyards of their multi-dwelling enclave. I have imagined that the earlier residents of the land enjoyed its gentle sweetness in a similar way centuries ago.

Because my mother wasn't Catholic, I didn't go to the Catholic school across the street but walked every day to the public elementary school. I was a quiet child, labeled “shy”, but in spite of it, I was able to make some good friends. I met a nice girl named Diane in the second grade and brought her home one day after school to play. I remember very clearly her leaving through the front door, stepping down the stairs, and along the walkway toward her parents, who were picking her up. And, as soon as they were gone, my mother saying to me, “Don't you ever bring her here again.”

I can recall the shock I felt in that moment, the mixture of rage, helplessness, and grief, as well as the sure knowledge that “my mother is wrong!” I was seven years old, but I had had my first clear and undeniable experience of racism. My friend Diane also had a label, and her skin was brown. Not so clear and explicit, but just as smothering, was the realization at that same age, seven, that it's not so good to be a girl – boys have it much better, and it's better to be a boy.

My parents gave me many good things, set me up with strength and resilience to make the journey through life. During my first weekend of formal learning at The New England School of Feng Shui, which happened to take place just a few days after 9/11, our teacher, William Spear, emphasized the impact our parents have on shaping our lives. We can blame them for what they did “wrong”, or we can accept that they were probably trying their best – and acknowledge how something good can come out of something that was bad.

It seems to me that it is finally the time for this country to go to those places in its “house” that it has not wanted to deal with – those places that disturb, unsettle, but which are crying out for attention and light. As I have seen in my practice time after time, this process is not one to fear; but, instead, is one that brings the blessings of relief, release – and freedom.

Posted by Feng Shui Western Mass at 11:58 AM No comments: